Votives are an obvious choice for reception tables. They are small, so they don’t compete with centerpieces or cross-table conversation, and the burning time is usually at least four hours. An inexpensive addition to decor, votives add ambiance without major cost.

This is no news to most, so why post here about it? We did something a little different from the standard clear holders from Ikea or Michael’s: We spent months eating delicious French whole-milk yogurt – risking Lose Weight Exercise gain and a change in dress size – so that we could use the glass jars it comes in as candle holders. These jars are commonly used in France for various occasions, notably the December 8th festival of lights in Lyon. My favorite craft magazine, Marie Claire Idees, often features projects using the jars. My favorite was a vase of knotty branches with beaded jars hanging off of them (you’ll have to just picture that – I can’t find a photo of something similar). This site shows other design ideas for the jars.

For our jars, we chose simplicity: a single painted band in one of three colors (light pink, deep red, and gold). It’s important to buy paint that is meant for glass, which I purchased in the craft section of the Bazar de l’Hotel de Ville (refered to by its initials, “bay ahshe vay”). Other paints easily chip off: I’ve been known to use nail polish on jars when a crafty urge struck me late at night… When using glass paint, two coats are the minimum (in my book), to hide the brush strokes and really show off the paint color.

For some jars that I’ve kept around the house (too labor-intensive to repeat 80 times for the wedding), I added a design to the band: using a cut-out piece of a paper doily, I stenciled the doily pattern onto the jar with a contrasting paint. It gave it more of a Moroccan tea glass look. 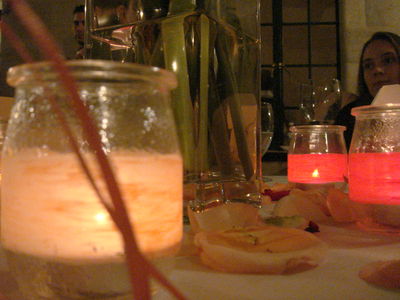