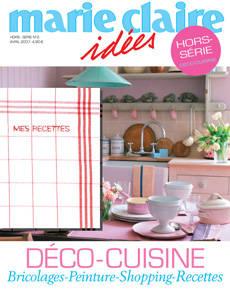 My favorite craft magazine, the quarterly Marie Claire Idées, has a beautiful supplement issue out right now about kitchen decoration. Now, I may 1) rent, 2) not have a ton of counter space, or 3) have the best appliances (is that a toaster oven? My poor cakes and tarts…), but this issue has inspired me to personalize some aspects of daily kitchen life. For example:

Best of all, it comes with the cutest little blank notebook for recipes! Ah, life’s simple pleasures…

For more about Marie-Claire Idees, check out this post on Craft Lover’s blog. 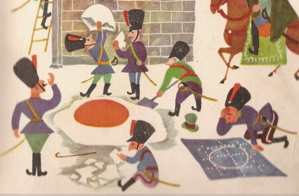 In school we learned many French songs and rhymes, which don’t have English equivalents. The following one I learned from an elderly man from Louisiana (he sang it as a child):

Because I have a love for old books and can’t bear to see a book thrown away, I recently saved three children’s books from the dumpster: Three French versions of those Little Golden Books so many of us grew up with. I never learned anything about a French “Little Miss Muffett” or “Humpty Dumpty” or “This Little Piggie…” and I don’t know if this is because I just didn’t spend my first years in France, or if it’s because they are English nursery rhymes that were translated just for this particular printing.

In any case, they are darling and I am in love with the vintage drawings and find the French version of “Ring Around the Rosie” (“…the roses are in bloom…”) is much more cheerful than “ashes, ashes, we all fall down!”

Here are some of the pages I’ve scanned (click them to enlarge). I hope you enjoy them as much as I have! 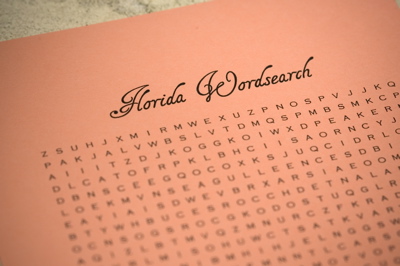 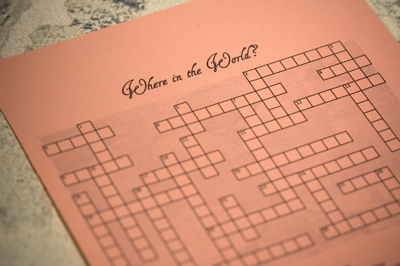 In December, I made a Florida word-search, travel-themed crossword, and a wedding word-search for various favors during our wedding week.  They were a hit, especially with the under-12 crowd.  I also couldn’t resist my crossword addiction and made a bilingual one for an Easter brunch we hosted two weeks ago (already! Spring is flying by…)

They’re incredibly easy to make with new software programs, such as Crossword Forge, Crossword Puzzle Games, and this Wordsearch Maker. Crossword Forge is my favorite, because it is Mac-compatible and can also be exported in web format, so that you can post an interactive crossword on a website like this one I made for the Paris Times (works best in Firefox).

I regret not knowing about these programs when I was still teaching beginning and intermediate French courses.  There are plenty of other uses, so what are you waiting for? Personalize bridal/baby shower games, make a crossword about a trip you took, or thrill a kid with a wordsearch all about her… What a procrastination tool! 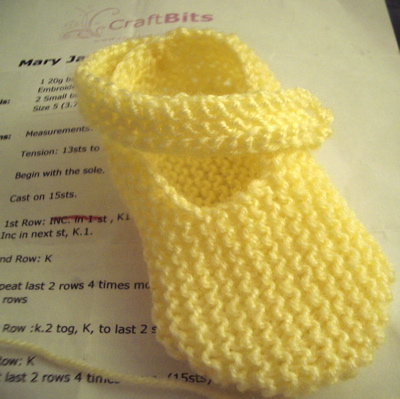 You would think that with all the little projects I enjoy (mittens, socks, and hats), that booties for a baby would be a cinch.  This is what I thought and yet I’ve just spent the weekend starting, stopping, and pulling out a half-dozen booties.

Problem number 1: Size.  I don’t have a good concept of the measurements of a baby’s foot.  I was convinced that the first pattern I tried (using the correct needle size and gauge) wouldn’t fit any foot bigger than a Barbie doll’s.  The ones I am making now are probably for a 9-12-month old, but they will have to do.  Perhaps I am wrong, though, and these 4-inch long baby slippers really are for a newborn, but I am not sure how to check.

Problem number 2: Pattern visualisation.  Contrary to the consensus of many knitters, I am quite comfortable on double-pointed needles and even prefer them.  Knitting in a round makes it easy for me to visualise the sock/mitten/hat I create.  Many bootie patterns, however, are knit flat, on two straight needles, and then sewn together at the end.  I am satisfied with the pattern I am working on now, but it took a couple of tries to realise how exactly the squiggly shape I knit would actually become a tubular 3-D item.

I still need to pick up a couple of buttons for this Mary Jane-style bootie, but in all, this is a quick 1-2 hour project.  I thought the angular strap was unusual and that’s my slight modification of the Craftbits pattern.

In my last post, I mentioned two other bootie patterns, which I am eager to try, but which require needles that are smaller than the ones I have.  Looks like I have another excuse to run to the craft store.  (By the way, my favorite supply shop in Paris is La Droguerie, in the 1st arrondissement, near Les Halles)  I’ll block the booties and the sweater and these will be a cheerful first completed summer project! 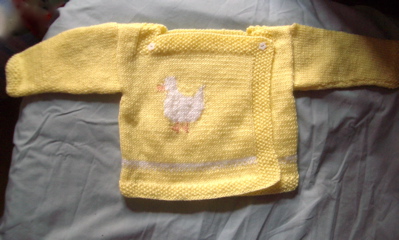 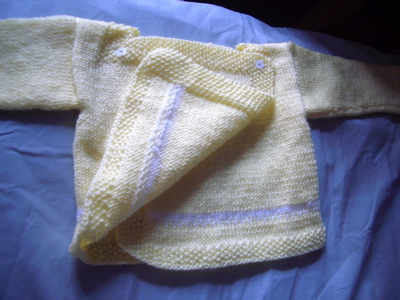 I have finally finished it! Since I am in the middle of several projects at once, it’s really been ages since I posted a real, finished craft project. Well here it is! I used the trusty baby wrap-around sweater pattern from Chez Florence. The peach sweater for Evelyn Grace was so pleasing, I thought I’d stick with a sure thing.

Next on the list is to tackle some baby booties with the same yellow yarn and then send these off to the parents-to-be. It is surprsingly difficult to find cute bootie patterns (so many looked bunchy or too geometric or something), but after searching and searching, I did find a few that I liked:

I’ll try these out and review the patterns as soon as I stock up on the correct needle sizes. Knitting for all these babies requires the tiniest needles – I suggest choosing wooden ones, if anyone else is in this boat. The metal ones tend to slip right out. We’ll see what I can find: it’s always a work in progress! 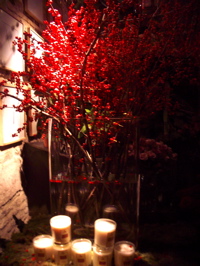 It goes without saying that Parisian boutiques have some of the most attractive shop windows and displays among world capitals. Inspiration for home interiors, fashionable dressing, or decor for a fancy soirée, window dressing is no trivial matter here and contributes significantly to the aesthetic experience of the Parisian flâneur. American photographer Brian Ogilvie has a wonderful on-line gallery of eclectic Parisian shop windows of all kinds.

One of the most stunning trends I’ve noticed is the dramatic lighting most flower shops use in our part of the French capital. Unlike many flower shops I frequented in the States, which seem to say “spring!” all year round, virtually all the florists in the Marais display their botanic creations against a pitch-black backdrop, with a light source usually illuminating the bouquet or centerpiece from only one direction (above or to the side), for effect. One major exception to this “rule” is the outdoor flower market that lines the Seine, but the individual shops do seem to follow this display style.

With Easter and warmer weather approaching, I wonder if this will change. For now, I’ve tried to capture this phenomenon in photographs, below. I took many of these photos at night, but I promise they have a similar effect in daylight as well.

Where has all my crafting gone? I am in the midst of knitting two nautical sweaters for May/June twins, but am hung up on gauge problems and have yet to find more of the yarn I need. I am thinking of scraping it and getting a new stash alltogether!

In the mean time, I have a lot of cotton and so I’ve decided to add some home-made love to the everyday by making knit dishrags and towels for the kitchen. Mason Dixon Knitting has inspired me with this post, which includes a free pattern for a 9-square dishrag. I made up my own pattern, however, since I needed to use a little less brain power to make my first dishcloth on the morning commute.

*EDIT* I just found a picture of a hexagonal dishrag!  I must make one!  Craft Lover’s blog has instructions on how to make a knit hexagon.

It’s springtime in Paris, which means that as Easter approaches, chocolate shops are filled with candies in the predictable shapes of eggs and rabbits, and one shape I was not expecting: bells.

In France, the church bells stop ringing on Maundy Thursday and remain silenced until Easter morning, when they ring once again to celebrate the Resurrection. The legend told to children is that the chimes leave France and go to Rome (apparently to visit the pope) during this time. When they fly back on Easter Sunday, they bring along chocolate eggs and treats. Délicieux!

The drawing is from a children’s coloring page from this site.