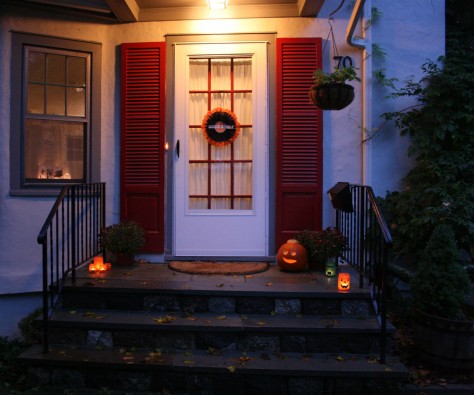 I had a blast decorating for Halloween this year, and I think the most fun was figuring out how to make use of things we already had around the house. It wasn’t as all-out-crazy as the Jack-o-Lantern Blaze down the road, but festive nonetheless. 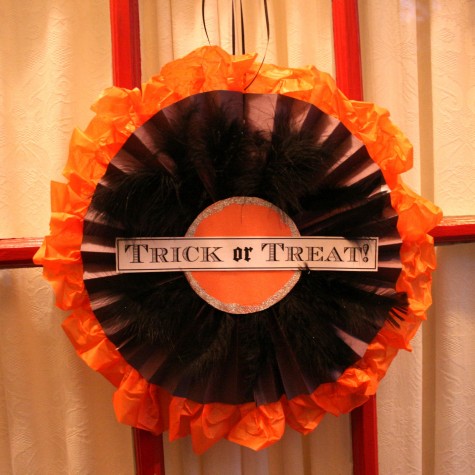 I am pleased with how my Trick or Treat “Wreath” turned out. It took no time at all, really! I was inspired by this one, found via, this blog, although I didn’t find a specific tutorial for one. Adding black feathers gave it texture and depth.

BLACK CIRCLE: I Just accordion-folded some black construction paper then folded them in half to fan out the folds (it took 3 sheets to make the round circle). Then I bunched strips of orange tissue paper and taped each “pleat” to each alternating fold. It was like sewing a ruffle, only with paper and tape instead of fabric and thread.

ORANGE CIRCLE: Then I cut out a round of orange paper, decoupaged it to a piece of cereal box and cut that out. I then added silver glitter to the edges.

TEXT PLATE: The “Trick or Treat” piece was created in Adobe Illustrator, printed, and decoupaged to another piece of cereal box. It helps to cut the cereal box to size once you’ve decoupaged the piece to it, so you are sure it is a perfect fit.

ASSEMBLY: I glued feathers in every 3rd pleat, then glued on the orange circle and text plate. The ribbon should be attached to the center folded paper parts, but I was in a rush and quickly punched a hole in one of the folds instead. I will rehang the ribbon to the center to save it for next year. 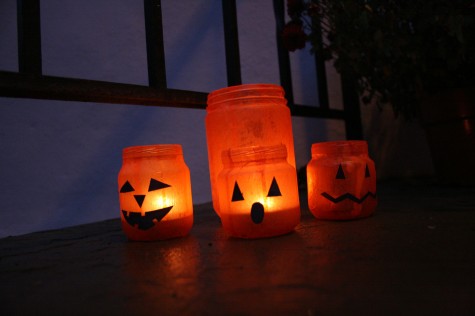 These pumpkin candles (larger ones shown above in the entry photo) were surprisingly long to complete. They are really easy, however, and are a great way to use glass jars from your recycling bin. They look almost papier maché when finished. Just cut strips of tissue paper and decoupage them to the jars. Voilà! Check out this blog for the inspiration. 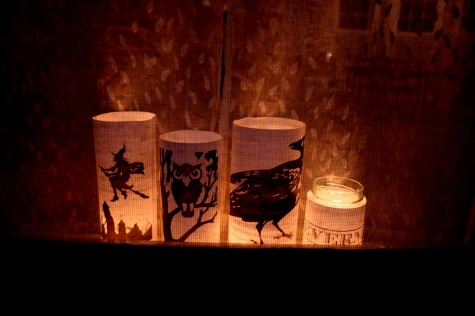 These white candle jars were peeking out from the window to the left of the door. They were the most quickly completed project (and a bit of an afterthought), but I still ran out of time to make an appropriate height of paper tube for the one on the right. Oh well. The left two images are downloads from Martha Stewart. The raven is an image I found online and then reworked in Illustrator (just using the live trace option to create clean lines) and printed out. The candle on the right says “NEVERMORE” but again, could use some reworking (and I would use a smaller font size next time). A cool effect, though. I just taped the paper to glass jam jars.

Hope everyone had a wonderfully spooky holiday!