When we lived in Paris I picked up a few vintage linen dishcloths at a flea market. What was unusual about them was that they had never been embroidered, so I did some internet research and created my own simple monogram to match the classically simple red-stripe design. Check out that project here.

Embroidered dish cloths are old school, literally. In the time period I study (late nineteenth-century France) girls learned how to embroider, knit, and sew in school. They also learned basic reading, writing, and math skills, but until the twentieth century the curriculum for girls and that for boys were drastically different. Not cool. What would be cool is if everyone learned needlework skills and science. Can’t we all benefit from using both sides of our brains?  This fall I’m giving a paper on one woman’s interesting educational theory for girls during this period. Maybe I’ll try to justify spending more time crafting as part of my “research.”

But back to the dish cloths: When it came time to celebrate my soon-to-be sister-in-law, Kendra, I thought I’d give her a French monogrammed dish cloth as a gift for the occasion of her bridal shower.

Since working on that first project I’ve discovered a fabulous site with vintage embroidery patterns that you can find here. I browsed around and came across a script alphabet that I think I prefer to the one I used on my own dish cloth. 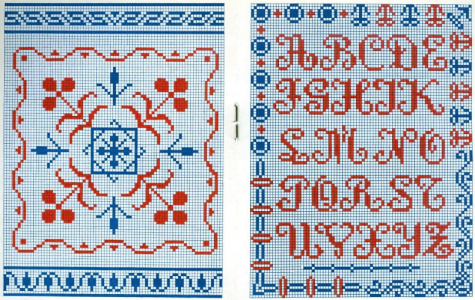 Check it out here. See anything missing above? No W – this is actually quite common in French patterns (words that use W’s are only recent additions to French). I suppose you could just put two V’s together… Taking a look again, there isn’t a separate I or J, either. I guess you would use them interchangeably? Luckily I only needed the letters K and B this time.

After downloading the above file, I used the screen capture function on my computer to “cut” the letters I needed and then lined them up in Preview to create my custom cross-stitch pattern.

I then embroidered the initials onto the dish cloth, not worrying too much about finding exact squares, although it was fairly easy to do so on the thick linen. 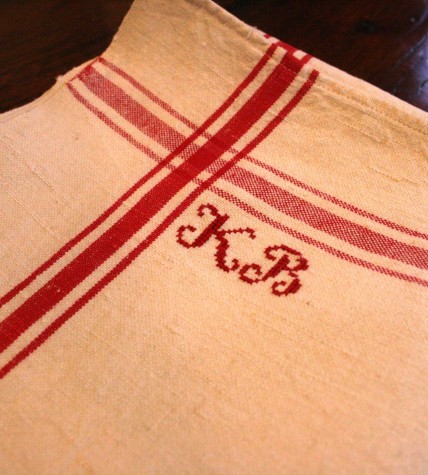 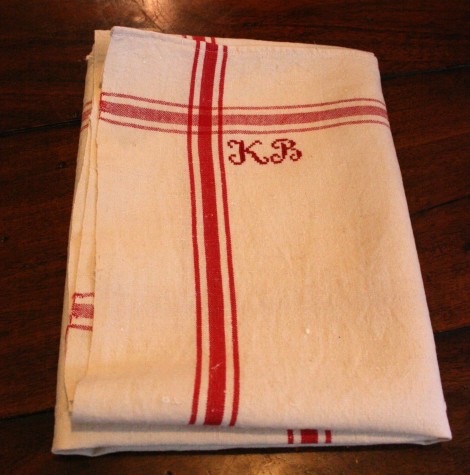