My latest before and after: 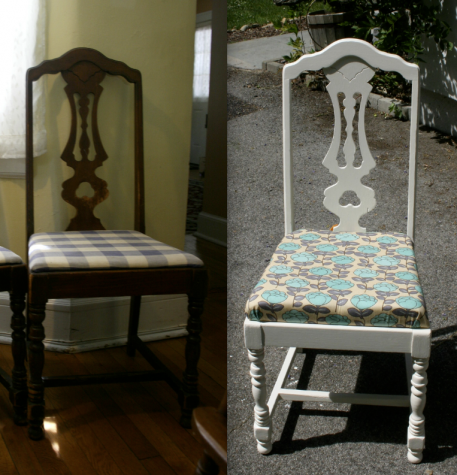 This is a classic chair update, nothing too fancy or unusual here, but it’s so quick and easy, I thought I’d photograph the process and encourage others to take on a similar project. You can do this in an afternoon (including drying time), and the actual active time is only about an hour or so. That means that instead of taking coffee/snack breaks, just take a quick painting break and it really takes no time at all. 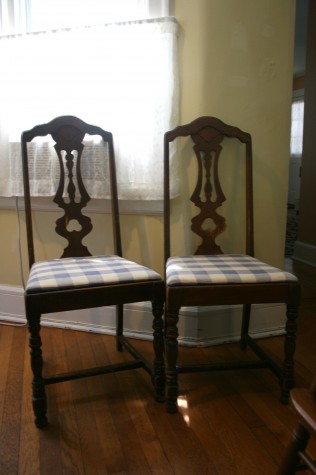 Before: We picked up these two chairs at a now-closed antique shop in Cold Spring. I think we paid around $10 each and the seller believed them to be from the 1920s. They were cool and rustic-looking, but had some issues, one of which was smelling kind of stale. I knew those chair pads had to go. 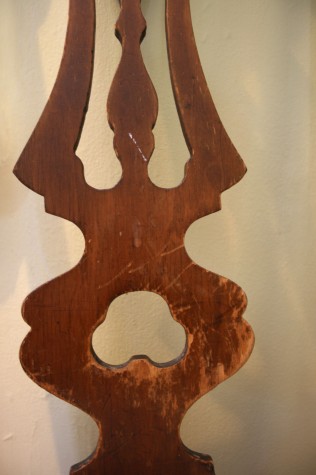 The wooden parts are pretty beat up, especially in the cut-out backing and around the bottom where feet have weathered away the corners. 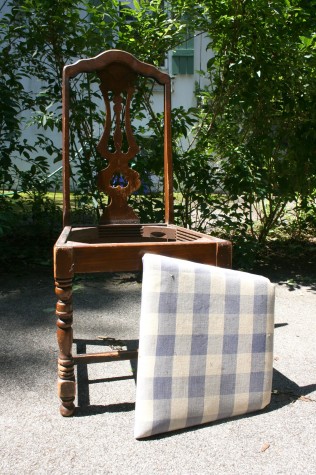 So let’s get  going! First, I took off the seat, which was really easy. I turned the chair over and just had to unscrew four screws. 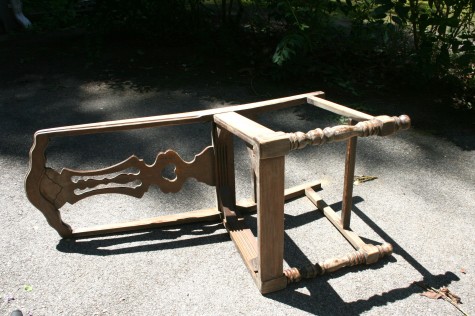 Next, I sanded it down so that the paint would adhere better. 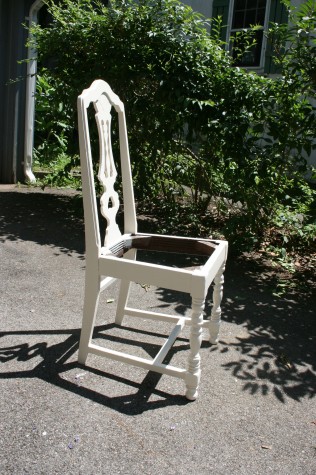 I used white furniture paint and brushes, but would probably recommend a spray paint for an object with so many nooks and crannies. 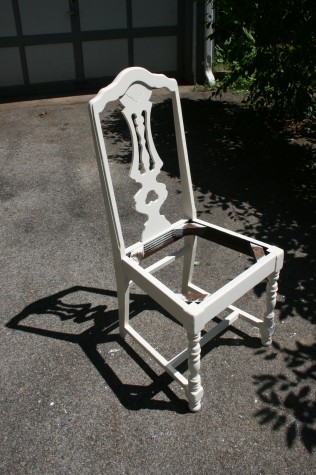 The first coat will look terrible, but after 3 coats, it wasn’t looking too bad. I let it dry about an hour in between coats. 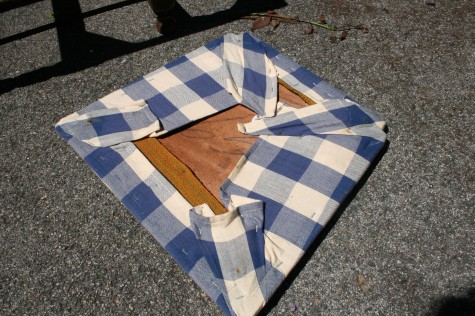 While the paint was drying, I dealt with the seat. See how there are 2 layers of fabric? That checkered layer is actually a napkin from Pier I. I figured it out as I took it apart: its still had its original tag with a $3.50 price. The orange layer is probably original, and below that was that old-school stuffing that just falls apart. I’m not sure what it’s made of. Animal hair of some sort? Anyway, I pulled out all of the staples and upholstery tacks and got down to the wooden base. 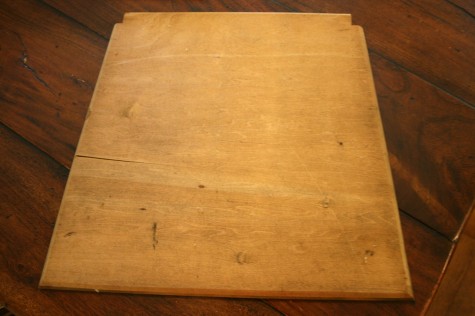 All clean and ready for new padding. 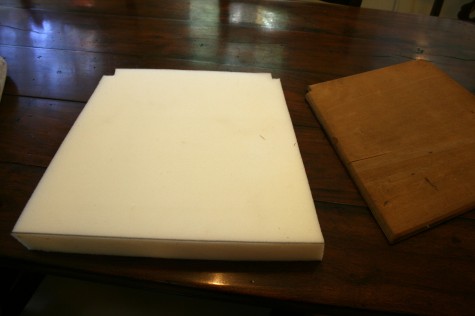 I just took the wooden seat to a sewing store that cuts foam to size and had a new foam pad (2 inches thick) in minutes. I discovered a place that does this only minutes from our house, so this was really an easy step in the process. 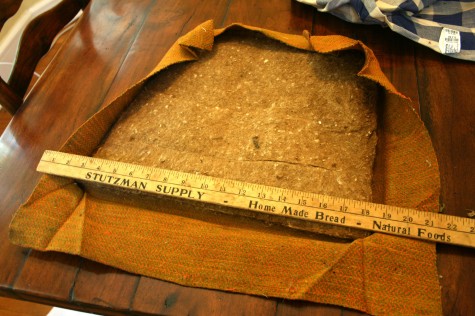 I measured the old fabric for size. I figured I needed a square about 22 inches wide. 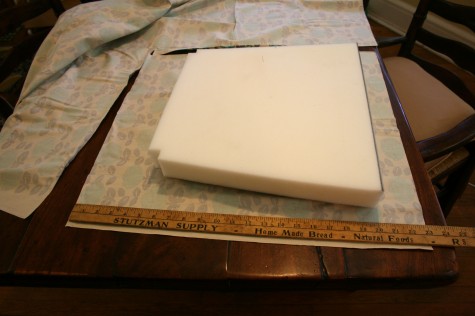 So I measured my new fabric and laid the foam and seat on top to make sure I was giving myself enough clearance for the new pad height. I think most upholsterers use more than just the foam padding in this process: they would at least add a layer of batting to the top, but I was keeping it quick and simple.

By the way, the fabric is a Japanese print I found at Purl Soho a few months ago (no longer available there) and bought specifically for this project, since it has a heavier canvas-like Lose Weight Exercise. It’s by Nani Iro for Kokka and called “Antique Label.” 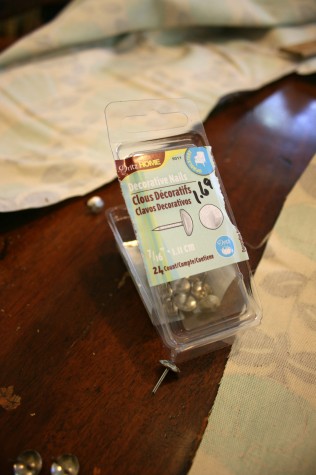 I used these tacks to attach the new fabric to the seat with a hammer. One package contains 24, but I actually needed 28, so I used some of the really old upholstery tacks I recovered from the old padding and used them on some of the parts that wouldn’t show as much (not that any really show being underneath.) 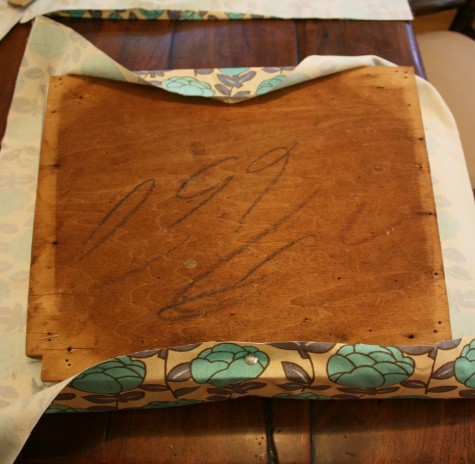 I used the same technique to do this as you would to stretch a canvas: Start in the middle on one side, then the middle on the other. Then turn 90 degrees and tack the middle right and middle left. Work this way slowly extending to the corners, leaving the corners for last. 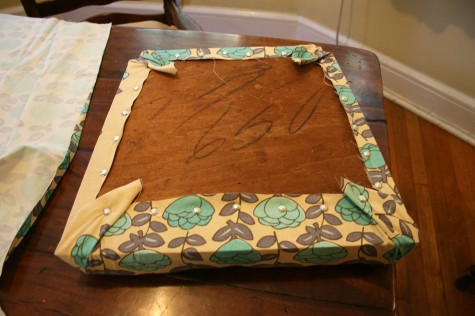 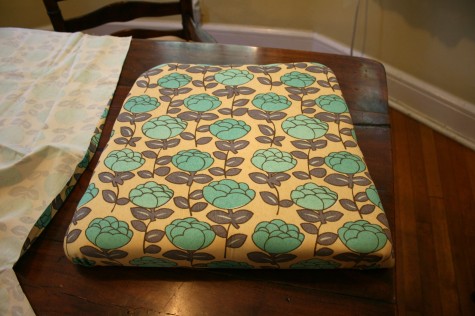 Now all I had to do was reattach the seat to the chair with the four screws I had taken out at the beginning. 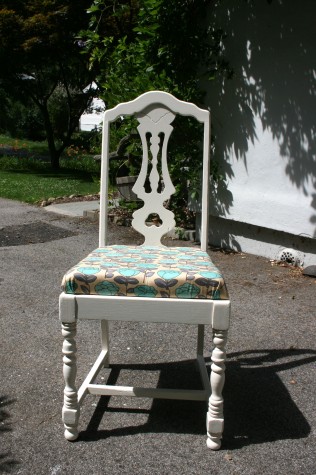