Jax likes to reminisce with us about when he was three. “Remember, when I was three? and we went to their house?” or, “Remember, when I was three, and I was crying because I wanted a different water cup? That was so silly.” His fourth birthday isn’t until September, but he’ll proudly tell you that he is no longer three, but three and three-quarters. So sophisticated and mature. 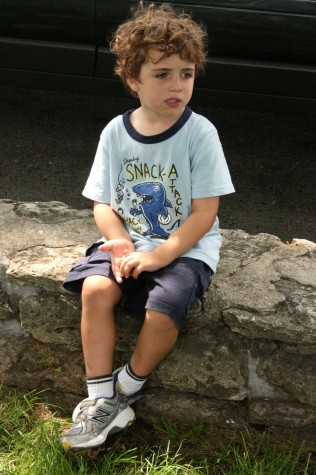 What follows are some Jax sayings from this sweet age we never want to forget.

Tonight at dinner Jax was blowing bubbles in his milk while Seth and I were talking (or maybe trying to keep Ben in his seat. I can’t remember). After a bit he looked at us with his half-smile smirk and said “I think I should probably be in trouble by now.”

Last week, while Seth was getting Jax dressed in a button-down shirt:
Seth [smiling jokingly]: I won’t do your top button so you don’t look like a nerd.
Jax: What’s a nerd?
Seth: Someone who spends so much time on the computer that they forget how to dress themselves
Jax: Daddy, YOU are a nerd!

Jax loves to be precise about vocabulary:
Me (to Jax): Daddy’s working
Jax: No, he’s BLOGGING

Foreign languages are a big deal around here, and while we listen to French songs and have “French day” (less often than I hope to), Jax has invented his own language, Glurm. It seems to consist of English words with the beginning consonant replaced by “gl.” Thankfully we’ve picked it up pretty quickly.

Other interests of the moment are swimming, painting, and drawing roller coasters. And any activity involving glue. Today he glued buttons and wooden beads onto a piece of cardboard, making them into shapes, such as binoculars. Clay has also been an exciting recent discovery: while Jax’s paintings are still very much about experimenting with the media, his clay creations are pretty complex representations of real things (submarine, lamb, rainbow) or of his imaginary inventions.

Jax is the sweetest big brother, too. Ben does a lot of head bumping and Jax always runs straight for the freezer to get him some ice. Often in the morning Jax will ask for Ben and want to hug him. They play rough, too, and Jax rolls his baby all around the carpet, Ben laughing the whole time. Well, until it gets too rough. Ben wants to do everything his brother does, and we’re proud of them both!

2 thoughts on “Jax, at age three and three-quarters”