We made a quick trip to Wisconsin last month for my dad’s 60th birthday and one of the highlights was a visit to his lab. Jax was thrilled to help with some experiments and is still talking about them. My dad also gave us some ideas of experiments we can do ourselves with common household staples, so the fun continues! 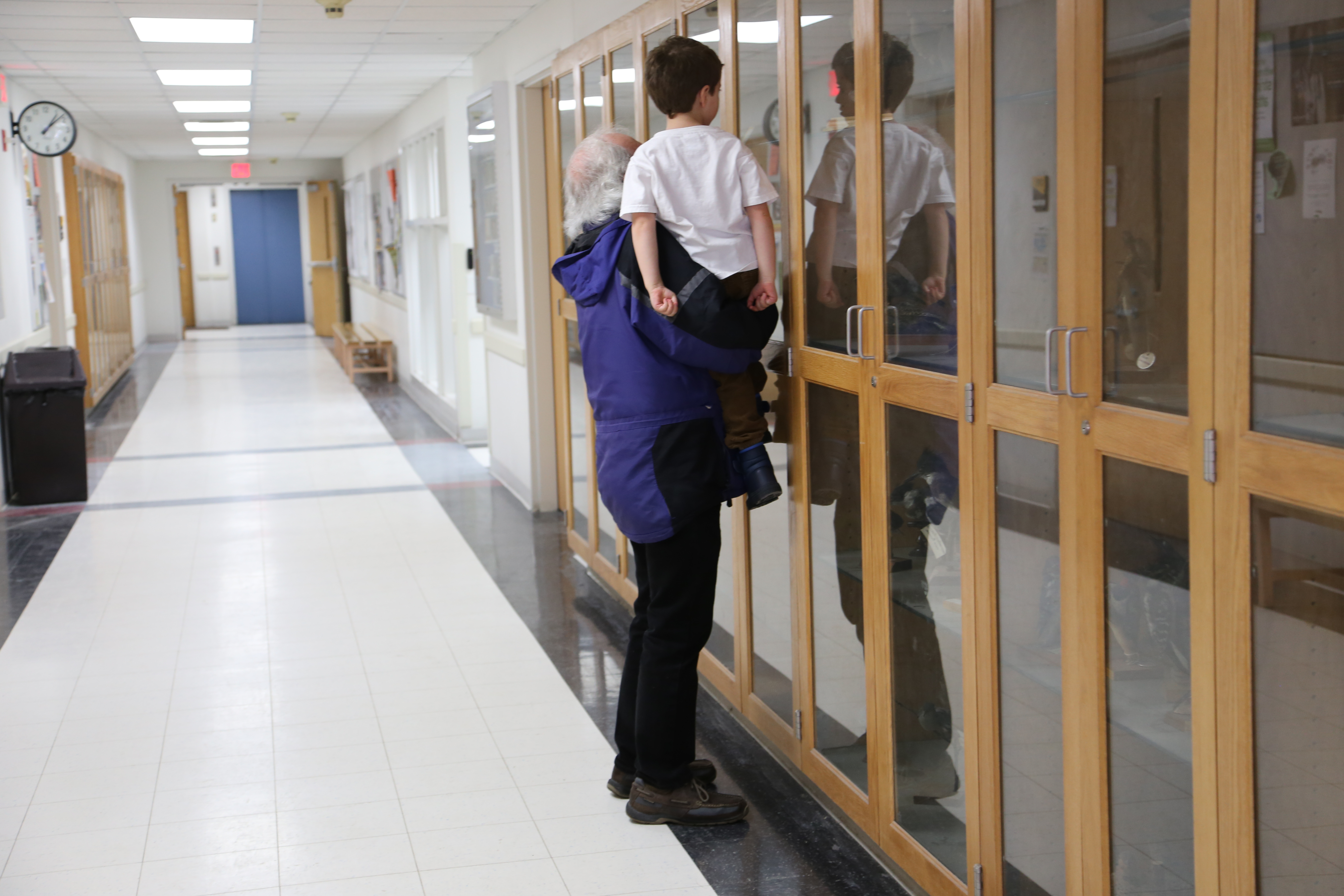 Looking at a very large crab on display in the halls of the biology building.

Experiment #1: Dry Ice. What happens to it in water? Is the smokey stuff hot or cold? 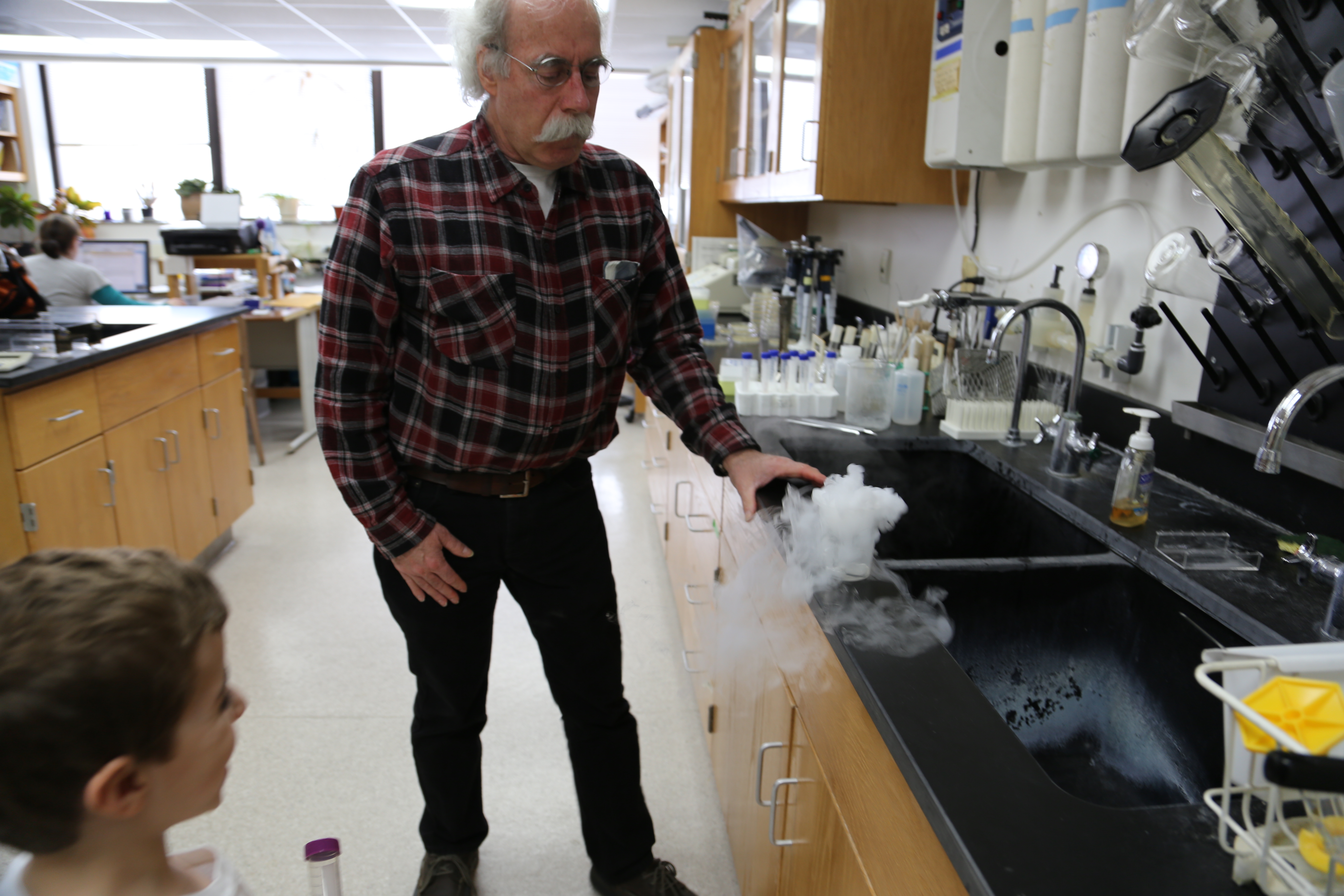 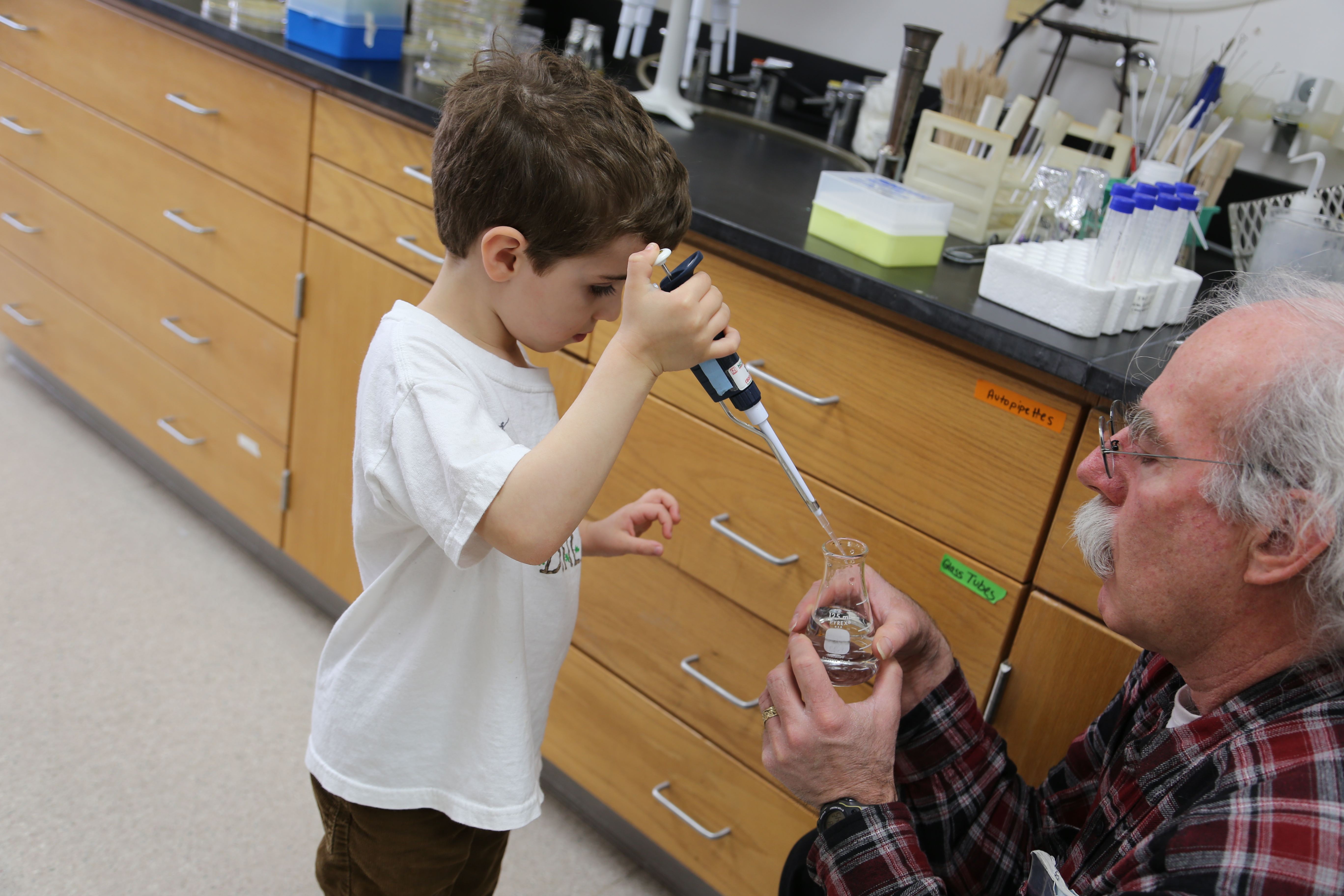 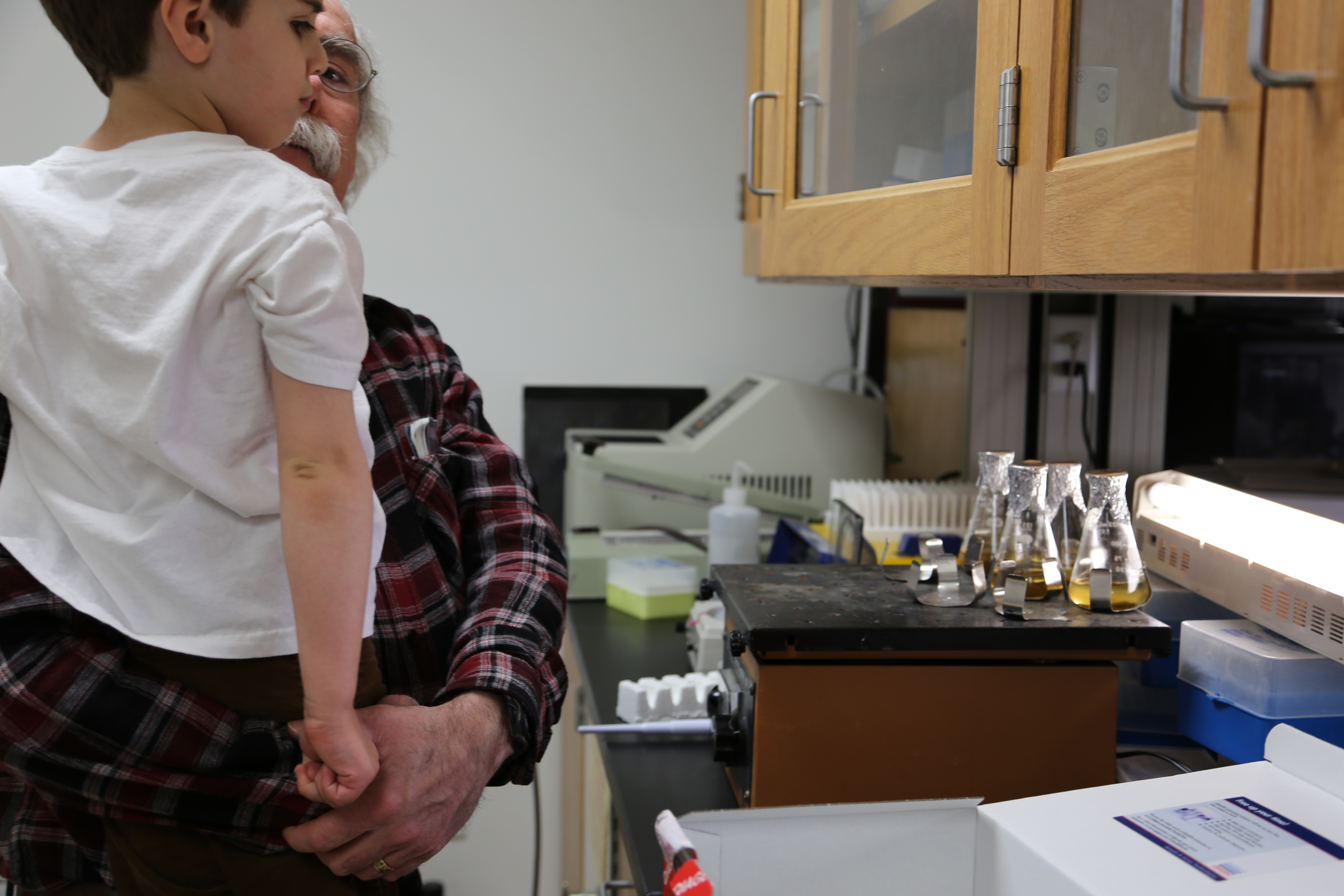 Jax left the lab with his very own flask and a couple of plastic test tubes. Here are some experiments we’ve been able to do right here in our kitchen:

Fizzy Whizzy!: Add vinegar to baking soda and watch what happens.
Which one floats?: Pour olive oil into a flask and then add water. Which liquid is on top? Put the top on, flip it over, and see if it stays that way. This was a huge hit, and got Jax thinking about other liquids to try. He is thinking like a scientist!

This board on Pinterest has many more exciting and elaborate experiments to try, too.

When I was pregnant and living in Paris, I stocked up on all sorts of books and toys for baby Jax. Now that he is four and a half, and Ben is nearing two, I am finding a gap between these basic board books and the materials I’d like to use for French learning at the preschool level. While I daydream about stuffing suitcases with inexpensive used books and DVD’s during our next trip to Paris, there are, in fact, many media resources available to us here in the States, often without expensive shipping fees and always cheaper than a plane ticket across the Atlantic.

What follows is a list of what I’ve found to be useful and accessible, but please feel free to comment if you have more to add to the list!

Books
I was surprised to find that amazon.com sells reasonably-priced books entirely in French with free shipping. The selection isn’t very extensive, but it’s not bad for a beginning library. You need to carefully read the descriptions, however, as some books are “bilingual,” meaning that the story is told with French on one side of the page and English on the other. If you want to avoid slipping into English translation, these choices would not be ideal. But certain families may find that this works well (or even better) for them, so do know that they are around! Below are some French versions of familiar favorites (by Dr. Seuss, Eric Carle, and company), but also some French characters, like T’choupi, who is the star of a charming little series for preschoolers. T’choupi goes to school, rides a bike, makes a snowman, doesn’t want to share, etc. These are almost all under fifteen dollars (most are priced around ten) and did I mention they ship for free? Pas mal du tout!

Amazon also sells this wonderful imagier published by Usborne. While its title, First Thousand Words in French, is in English, every page is entirely in French, and the illustrations are charmingly detailed scenes with little labeled drawings surrounding them. This was a thoughtful gift from one of my French dissertation advisors and is one of my go-to word books. If you can get your hands on this great ten-dollar book (it seems to be out of stock from time to time), grab it!

And for older ones, or for bedtime, don’t pass over Antoine de Saint-Exupéry’s classic. (psst… it only costs about seven bucks!)

Magazines
When it comes to magazines, you can periodically check your local international press vendor, as I did for two years on my commute to Manhattan (there is a French section at the news seller in Grand Central), but something much easier and less complicated is to simply subscribe. It seemed like this option would be unreliable, given the fact that magazine subscriptions are usually national affaires and you’d have to pay a lot of extra shipping (and would they actually show up? who knew?). But I am happy to report that I have had great success with the publishing house Milan. 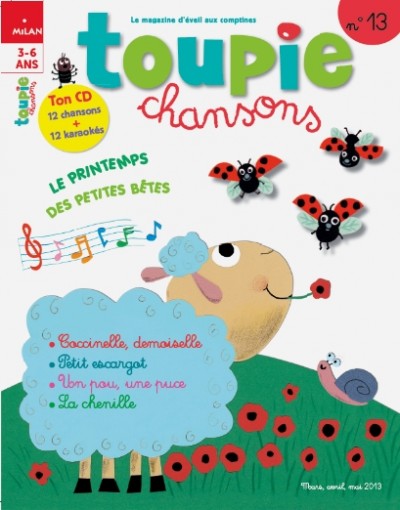 A month ago I subscribed to Toupie Chansons, which is a CD and magazine combination published quarterly. At 114 euros (including international shipping), it is expensive, but this is a high-quality product for kids of all ages and the first issue arrived in a week. Because each edition follows a theme (animals, kings and queens, spring), the dozen or so songs on the CD range from familiar (Sur le Pont d’Avignon) to the more obscure. The accompanying magazine has the lyrics and music for all of the songs, a corresponding coloring activity for each song, and additional activities and learning pages in the back (all about the drumset, for example). A feature I haven’t used as much as I could is the instrumental track which follows each song on the CD. Jax and I sing our own version of the simplest songs, but it’s something I’d like to use more. A word of wisdom, however: be sure you back up these expensive music tracks! I have them all as mp3’s and we use the CD’s in the car. It’s somehow still surprising how scratched they get with use. Also note that, although I subscribed only to Toupie Chansons, I also receive the monthly Toupie magazine, recommended for ages 3-6 years and filled with short stories, poems, stickers, matching and “what’s different?” activities, and more. I am so pleased with these magazines, and feel this was a great investment. We will use and reuse these songs and stories over the years.

Music and Videos
Speaking of music, this may be the easiest form of media (aside from websites) to get your hands on. The albums below are all available as digital downloads or as CD’s with free shipping, and are ones we use in our family and recommend.

And as for video, the Little Pim series is really the only language learning series marketed as such that I’d recommend. They follow the learning philosophy of immersion and repetition, and use real language structures, which are simple but mimic real-life usage.

But there are a lot of free options for French videos, too. We often watch Trotro and Barbapapa cartoons on YouTube (search for “Trotro francais” and “Barbapapa francais”). Netflix has hundreds of classic French films for adults (and teens), but also The Red Balloon, a sweet story that appeals to children as young as three. While not very language-rich, the movie is a French classic with a few words and many beautiful views of 1950s Paris.

Toys
Remember that virtually any toy or game can be played with in any language, as long as there is minimal text and the people playing with it are using only the target language. Candy Land can be used to teach colors, dominos to teach numbers, a toy barn with animals to make animal noises, play food for eating, drinking, and cooking vocabulary. But sometimes the goal is simply exposure to text. Or if you, the parent, are also a language learner, sometimes it takes more guidance. For this, I’d recommend the following toys and games, which are ones we use or at least similar to ones we do.

And my personal favorite, a French calendar from Nature et Découvertes. We bought ours at one of their stores in Paris, but it looks like you can order this one online. We have been trying to start our French playgroup with the calendar, to talk about the seasons, numbers, and some minimal vocabulary (“une fleur”…) Plus, this is cute playroom or kids’ room décor.

French is much more than France!
This is so important to remember, especially in North America. We live a half-day’s drive from Montréal, and yet so many of the French materials we have cross the Atlantic. A friend who runs a French immersion school suggests the following:

Éditions Scholastic: the French language branch of the familiar Scholastic publishing house, this one is geared to the Québecois market.
Amazon Canada: search Books, then narrow on the left column by “French Books” and then “Jeunesse.” There are over 20,000 titles!

And don’t forget to search etsy and ebay for French books and other treasures. Where have you been finding all things French these days?

I use affiliate links for amazon.com. The suggestions are my own opinions, however, and all other links are commission-free.