Life is crazy right now. Two kids, teaching a class, midterms sitting on my nightstand, waiting to be graded… I have masses of admiration for my parents and in-laws, who raised three kids with both parents working full time. Babies become toddlers, and toddlers become little children with personality and new talents and it’s hard to escape all the clichĂ©s of parenting (it goes by so fast!). And so, I’ve been wanting to document this time in our lives â?? and blog more about it â?? but have needed someone to guide me a tad in the process. Nothing ever gets done without deadlines, as a wise professor told me once, as I embarked on writing my dissertation.

So I’m going to take a cue from one of my favorite photo publishing sites, Paper Coterie, and follow them for the month of April. Who knows if I’ll keep up on time, but I have every intention of posting something for each of the days’ themes (even if I post late). The overarching theme? Me. I usually shy away from such ego-centric stuff (ug, the bratty “it’s all about me” attitude we pass on to our children in this culture…). But I think of the approach as simply one of sharing, documenting, and remembering. 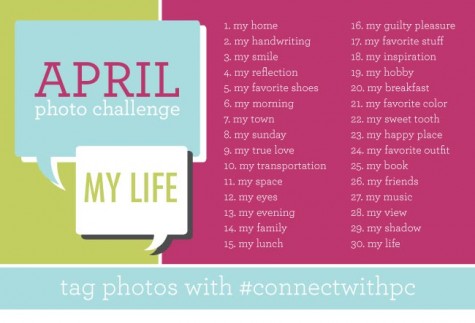 So voilĂ . Today’s subject is My Home: 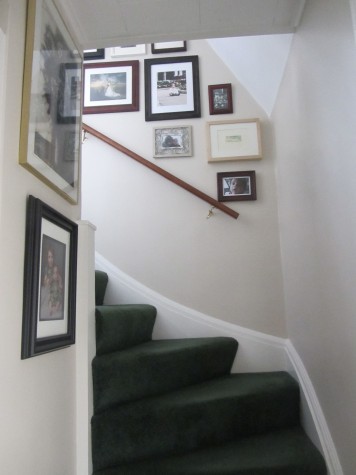 This is the gallery wall I’m slowly putting together in our stairway. I love it because I’ve had a lot of the frames and artwork since our city days. Most of the photos are newer ones of our wedding and kids, but I also still have a photo I took of my sisters in 1994 (?), an assignment in my photography class in high school. There is a lovely little photo of my granny and her two sisters that my sister Monica had copied and framed for all the girls one year for Christmas (it’s the top-right one in this picture). On the left is a photo of Jax and Ben that I had taken at a department photo studio. Matching 70s shirts for a 70s kind of activity. The charcoal drawing on the left was done by the father of one of my best friends growing up. He was an art teacher and gave this piece to my family as a thank-you for taking my friend on a vacation with us. When we got the house, my parents gave it to me and I’m so happy to have it.

I picked up this kalanchoe plant for a party we had at our house last May, to celebrate my graduation. I neglected it for months on various bookshelves and yet it somehow managed to stay alive. I noticed its cute little white flowers were starting to bud, and I so thought I should give it another chance and pay better attention to it. 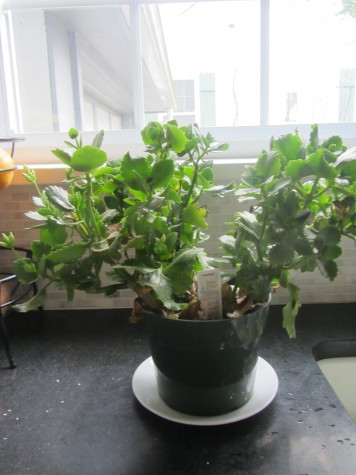 The flimsy, unsightly pot had to go, however, and it was clear that it was actually holding three individual plants that could be easily separated. I just grabbed three soup bowls I had picked up for a dollar each (in pre-kid days, breakable ones we weren’t using) and filled the bottoms with pebbles we had in the garage. This is essential for drainage. 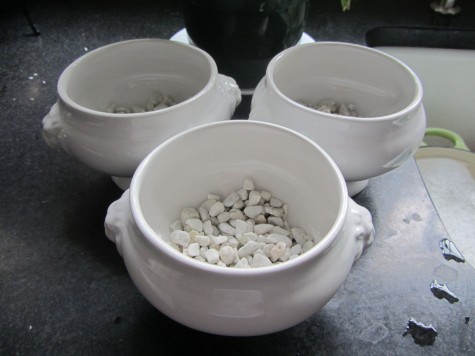 I added some dirt, put one plant in each bowl, and then packed them in well before watering. 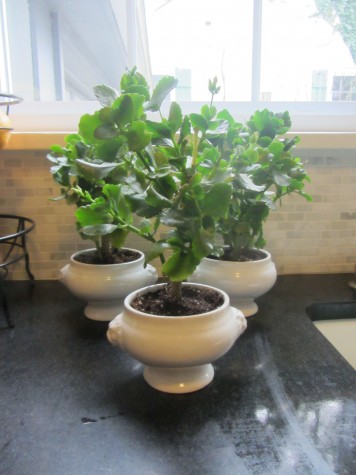 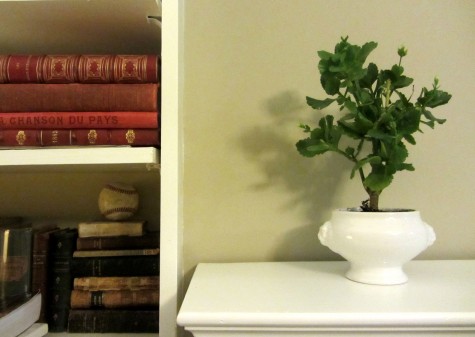 When we bought our charming little circa-1930 house, we planned to renovate the kitchen as our one big house project. This house is rock-solid and has fun architectural details throughout, and the previous owners over the past decade or two made some great improvements to the house, which we found out is actually one built from a Sears kit! Ah, the old days of DIY. Although the total square footage is just under 1500, the two-story layout (with finished basement) is such that we can all spread out and feel like we have our own little nook to play or work. 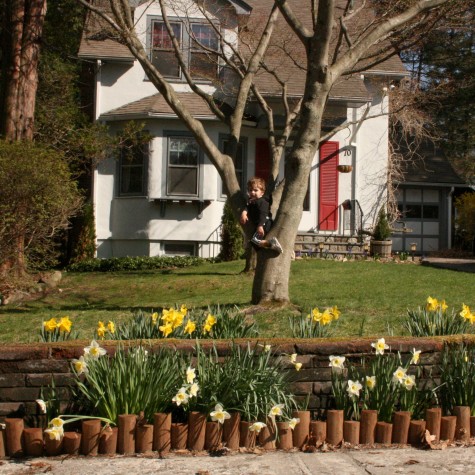 It took two years to take the plunge and finally renovate. It was a long process, but overall, we’re happy with the results. But first, let’s take a look at the before (just after we bought our new range, which you can see in this picture): 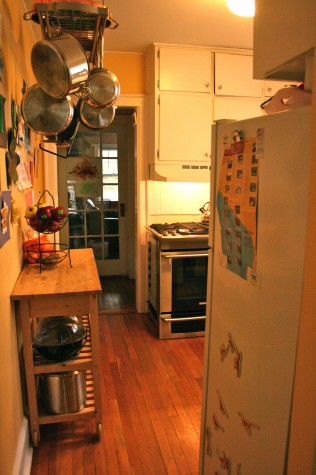 Above was the view right from the front of the house: two doorways led to the glass door to our den/office/possible third bedroom. Originally that doorway next to the range was the way out of the house, but the den and a bathroom were added on a couple years after the house was built â?? still a while ago! 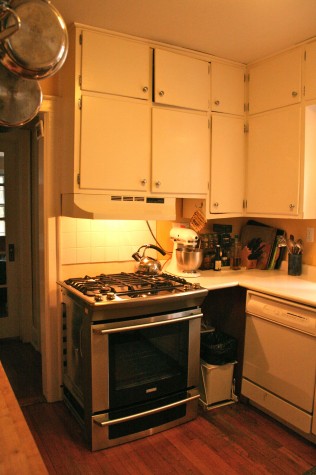 The hood above the range was too low for code, and all that corner space between the range and the dishwasher was unused. No corner cabinet, just a spot perfectly-sized for our pull-out garbage and recycling bins.

The windows were charming but not very functional, and those bottom cabinets weren’t looking so good. 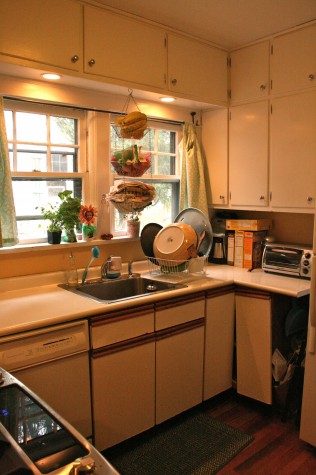 We actually broke the hinge off of that corner cabinet door, and couldn’t easily fix it, since the cabinet and door were made of particle board and I couldn’t get a new hinge to screw in tightly. 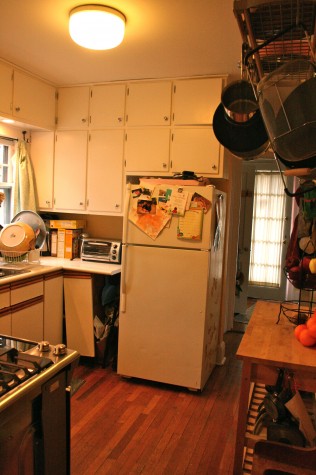 Look at all of those cabinets! This wall was cute and functional, but we later learned that the paint on the back wall of the cabinets had been peeling off. We also were hoping to fit a slightly larger fridge into this space, which this configuration wouldn’t allow. 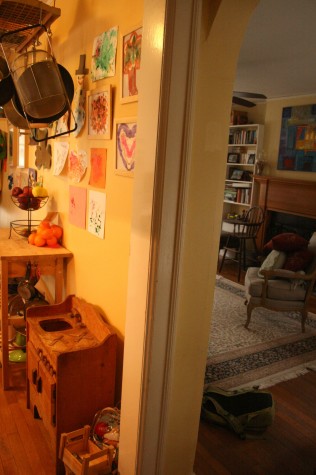 This is the view from the hallway next to the den. The doorway on the left led out of the kitchen and through an archway to the dining and living areas. 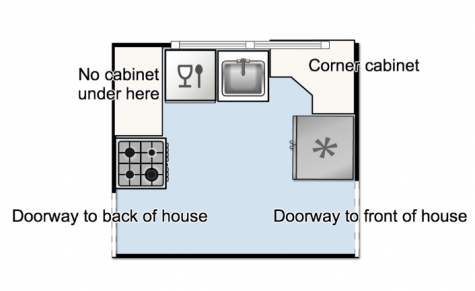 Here were the problems to address:

~ The upper cabinets had settled and were sagging in some places (notably above the oven).
~ Uniformity of style between the bottom and top: the top looked like it was probably the original construction; the bottom, a renovation twenty or so years ago (I’m guessing).
~ Not one drawer! We were using our handy kitchen cart (from Ikea) for silverware, as there were no built-in drawers, probably because standard-sized cabinets couldn’t be configured in the allotted space when the bottom was renovated (I’m guessing it was a DIY job?).
~ The old double-hung windows were drafty and needed to be replaced. We have herb pots hanging just outside the window, but couldn’t really access them from inside.
~ Room for a taller fridge: The upper cabinets used to begin even lower, and previous owners had them shortened to make room for a 65″ fridge. A larger fridge – closer to 70″ – could not fit in the space, and we were eyeing counter-depth French door options.
~ Despite the kitchen’s small dimensions (9×10 feet!!), not all of the available space was being used: the corner to the left of the sink had nothing but a plywood support under the counter, and a space between the plywood and the oven that we were using for our garbage and recycling cans. There was also a gap between the right corner cabinet and the fridge, which we were junking up with paper recycling and plastic bag storage.

The solution to the layout issues lay in entirely moving the doorway: filling in the existing one, and cutting out a new one to lead to the dining area. 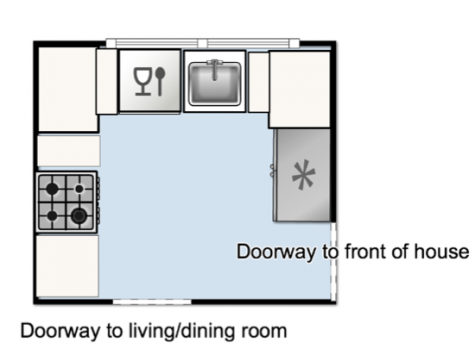 By moving the opening, we were able to get one 12″ and one 18″ cabinet â?? each with three drawers â?? to surround the range. From zero drawers to six! We were also able to have two usable corner cabinets, and the addition of the bottom cabinets also meant an increase in counter space. After a few months of use, we haven’t needed anything more. It’s luxury!

And now, the After: 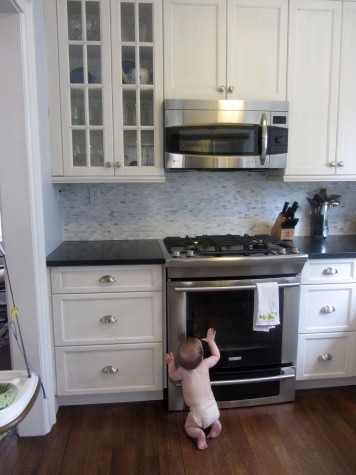 The view from the front side of the house. 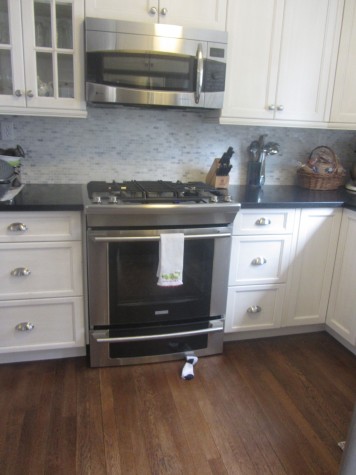 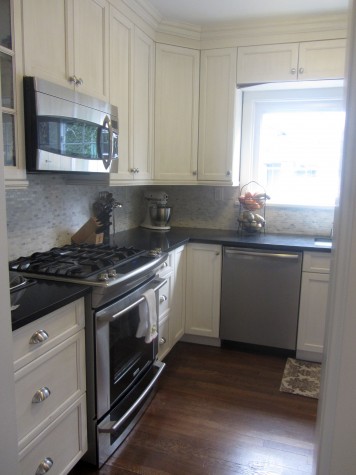 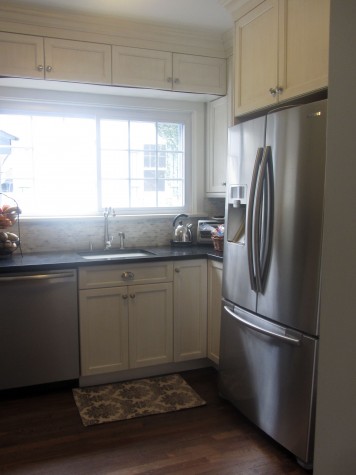 Look! A larger but not overwhelming fridge: this one is 36″ wide and about 70″ tall, but counter-depth. The window is a slider, so we can easily slide it to one side or the other and reach out to get fresh herbs. This winter we only have rosemary, but come spring, this feature will be even more exciting. 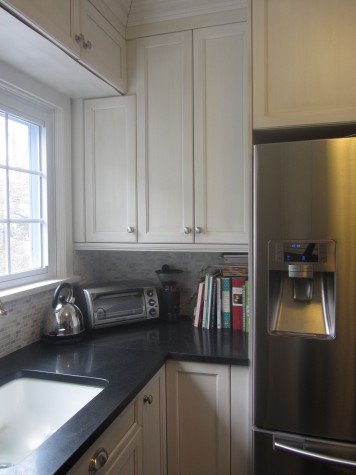 The cookbooks were hanging out here while our living room bookshelves were being painting, but I’ve kind of gotten used to them, so they’re still around. 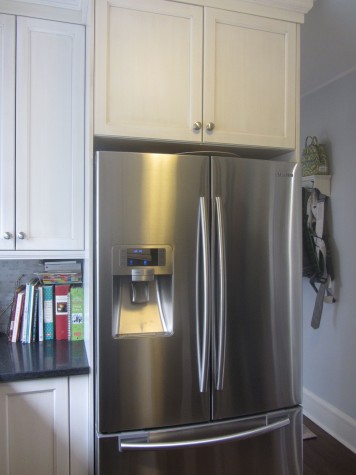 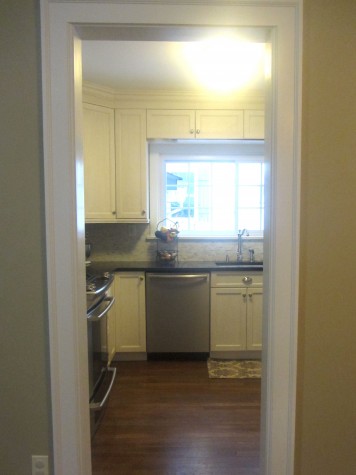 Our new doorway to the living/dining room.Â Come on in!